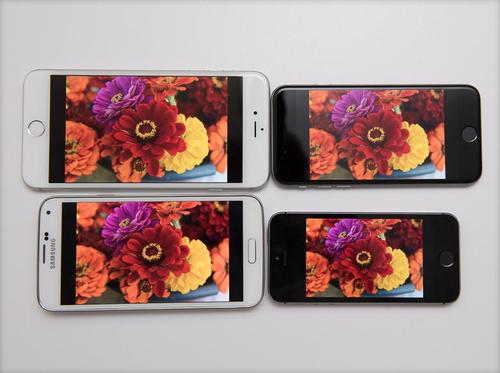 Aside from one another, the main competition for Apple’s iPhone 6 and 6 Plus comes from Samsung’s line of Galaxies, the Galaxy S5 and the upcoming Note 4.

On paper, the screens in the two companies’ phones are one of the biggest differences. Apple uses an LCD screen while Samsung relies on OLED technology, and Samsung offers higher resolution and slightly larger sizes.

But which one is better?

In the tradition of our previous screens tests we set out to answer that very question. We used a combination of objective measurements courtesy of the same expensive test gear we use to evaluate and calibrate HDTVs, and subjective observations courtesy of our priceless, expert eyes.

As usual each screen has particular strengths and weaknesses, but to our minds the Samsung Galaxy S5 has the best screen — albeit by a nose.Indeed, its victory over the iPhones was so narrow that it would be tough for most users to see many of the differences in day-to-day usage.

All four phones we tested — we threw in the 5s for good measure, and we have yet to receive a Note 4 for review — have excellent screens. In fact, despite using different tech, sizes, and resolutions, their screens are so close, they pale in consideration next to differences like ecosystem, battery life, and overall design.

The iPhones are brighter and slightly more color-accurate, but the Galaxy is plenty bright and accurate enough in its own right. Resolution and pixel density, despite seeming like a big Galaxy advantage, is good enough on all four to be essentially moot. The biggest visual advantage the Samsung brings to bear is contrast, thanks to the perfect black levels of its OLED screen. Much as it is with TVs, that advantage is enough to make it the best-looking phone screen we’ve tested yet, and slightly better than the iPhones 6 and 6 Plus.

*Can get higher in high ambient light situations (see below).

Like most phones, the iPhones don’t allow you to make adjustments to the screen quality beyond disabling the room lighting sensor and tweaking brightness. The Galaxy S5, in true Samsung tradition, is a different story. It has two different additional settings that dramatically affect the image on the screen.

The first is Screen mode, found in the Settings menu under Display. There you can select from Adapt Display, Dynamic, Standard, Professional Photo, or Movie. We measured them all, and Movie delivered the most accurate color for most content.

The second is called “Auto adjust screen tone” (AAST), found at the bottom of the Display menu, and it’s enabled by default. Uncheck it and phone light output increases slightly, from 301 to 352, improving its contrast ratio and its ability to compete with ambient light.

Checking the “automatic brightness” box on the S5 enables it to get even brighter in high ambient-light situations, such as direct sunlight. We didn’t measure this mode, but the S5’s screen performed extremely well under the sun.

For every phone above we disabled automatic brightness and maximized light output, which delivered maximum contrast. For the S5, we turned on Movie mode and unchecked AAST. 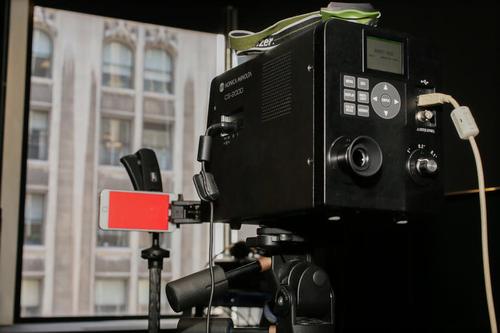 Brightness, black level, and contrast
Look at the chart above and a couple numbers stand out: “0% black” and “contrast ratio” in Samsung’s column, both of which require an astounding number of significant digits to express. The OLED screen of the S5 is infinitely black. The 0.0007 nits I measured is incredibly low, and I have an incredibly precise measuring device (pictured above), but even so I suspect it would be lower if not for stray light.

With a black test pattern the screen of the S5 was basically invisible to the eye; the same pattern on the iPhones was much brighter. The difference was less obvious, although still visible, under normal lighting when looking at material with black and near-black sections.

Contrast ratio is the difference between the brightest image a display can create and the darkest, and it’s considered the most important aspect of home theater picture quality. It’s also nice to have on a phone. According to our measurements, the S5 absolutely trounced the contrast ratio of the iPhones, with a contrast ratio more than 325 times better.

Of course, with text, regular photos, and video, the visible difference isn’t nearly as great as that number implies. We compared an array of test photos (courtesy of CNET’s Lori Grunin) on the phones’ screens side by side using an arrangement similar to the one with the flowers above, and the photo below showed the Samsung’s contrast advantage most readily. 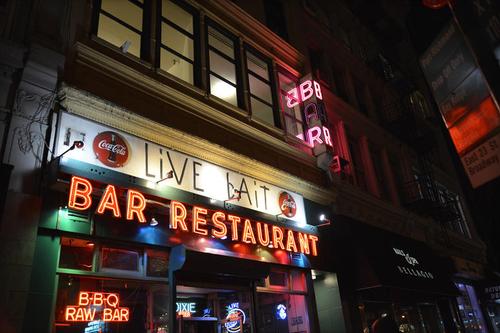 Not only did the black and shadowy areas appear darker, but the highlights looked brighter, giving the whole image more pop and life. Moving the phones to a darker area increased the Samsung’s advantage further. We noted that at times the iPhone screens seemed to have a sort of grayish film over black areas, especially the iPhone 5s, compared with the purer black of the Galaxy S5. Meanwhile we also noticed a slight off-angle haze at times on the new iPhones, which could be from the new sunglass- and direct sunlight-friendly polarizing filters.

In the past we’ve focussed quite a bit on the brightness advantage of LCD, and in our comparison the iPhone 6 did indeed measure about 60 percent brighter than the Galaxy S5. But the Samsung was still plenty bright, and the “100% white” number above doesn’t tell the whole story.

In addition to the “auto brightness” boost in sunlight we described above, the light output of the OLED screen increased when we measured a smaller white area. The 352 nits for a full white screen increased to 418 nits for a white window pattern occupying 25 percent of the screen, and 469 for one occupying 2 percent.

In other words, the larger the amount of white or bright material is on-screen at once, like the white background of a text-heavy website or app — like The New York Times or Kindle with a white backdrop — the dimmer the OLED screen got in comparison to the iPhones’ LCD screens (which didn’t change light output depending on content). But for mixed-brightness material, like full-screen photos or video or webpages and apps comprised largely of such content (such as Instagram or Facebook), the iPhones’ light output advantage dwindled.

Color accuracy
By the numbers, the iPhones beat the Samsung in this area, coming closer to the Rec. 709/sRGB target color points in our measurements. As you can see from the comparison below, where the circles around the edges represent the measurement and the white squares the target, the iPhone’s green and cyan in particular were better than the Galaxy S5 in its most-accurate mode.

In case you’re wondering, the color on the three iPhones was very similar, in particular the iPhone 6 and 6 Plus. The main area where they differed was in their grayscale, or color of gray. The 6 and 6 Plus were virtually identical and very close to the D65 standard, if a bit on the blue side. The 5s was bluer still and the worst overall for grayscale error, but still not terrible by any means. It still outdid grayscale on the HTC One, for example.

For its part, the Samsung showed a very good grayscale, with a slight reddish/greenish tinge in Cinema and Pro Photo modes, and a bit more bluish/greenish in Standard and Dynamic. The other three modes were less accurate than Cinema for hitting Rec 709/SRGB color points, with the Standard and Dynamic pretty significantly oversaturated, and Pro Photo coming close to the wider Adobe RGB color points. It’s worth mentioning that if your tastes favor more saturated, richer, less accurate colors, the Samsung’s choice of modes is a distinct advantage over the iPhones.

But color is about more than measurements, so we turned again to test photos to compare the phones. Black and white images illustrated the grayscale differences well, with the S5 tending a bit toward green and the iPhones, in particular the 5s, toward blue. The two iPhone 6 screens looked the best side by side.

Skin tones were technically more accurate on the iPhones, but the S5 looked very good too, and one observer subjectively picked it as the best of the four.

We also checked out highly saturated images, such as the flowers at the top of the page, and the iPhones again looked a bit better, with a deeper red compared to the very slightly orangish-red of the S5. Again, all four phones were excellent, and the differences would be tough to spot without direct, side-by-side comparisons.

Screen size and resolution
When it comes to phone screens, pixel count does matter, but not as much as the numbers seem to indicate. As a refresher, here’s how the four stack up.

The extra pixels per inch on the Galaxy S5 — 1080p on a smaller screen versus the larger-screened iPhone 6 Plus — don’t truly matter unless you’re staring at text held up to your eyes or are doing incredibly focused edits on photographs. Screen resolution hits a wall after a while, and Apple’s bet on 326 pixels per inch being good enough for most people on the iPhone 6 is true for us as well. On smaller screens, you don’t really need much more. Even though having true 1080p is a nice spiritual goal for video playback, it’s seriously hard to appreciate.

Looking closely at small text and fine details on all the phones, differences in detail were basically nonexistent. The scaling was superb on every phone, rendering the edges of text smoothly even at maximum zoom-out, and only by holding the phones uncomfortably close were we able to make out pixel structure. Details in photos, like the complex image below, were equally sharp on every phone.

The biggest subjective difference was in sheer size. Photos and video on the larger screen had more impact when we compared the phones side by side, and the freedom to resize text to larger sizes more comfortably was a nice advantage of the larger screens. That said, the S5 and iPhone 6 felt very close in size, and again the Samsung didn’t have a massive advantage over its non-Plus competitor. 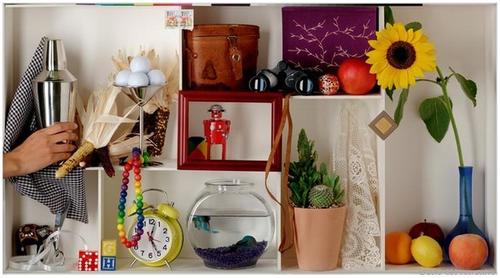 Conclusion
As always it comes down to personal preference. Some viewers might like the S5’s epic contrast or the ability to “pick your color” with its screen modes, while others may really value the simplicity and slightly better color accuracy of an iPhone.

That said, we think the Samsung has the superior display for most viewing situations and content. Apps and websites increasingly favor colorful images over black-and-white text, and in many images the screen of the S5 actually looked brighter than that of the iPhones thanks to its pop and contrast. The S5 also lost very little in high ambient light and outside.

Meanwhile the iPhone 6 and 6 Plus were nearly identical to each other in performance and are superb small screens in their own right. We doubt too many users will be complaining about their image quality. The new iPhone displays also have better contrast ratios and better color than the older iPhone 5s, but it’s a subtle difference.

In everyday use, distinguishing between the IPS Retina displays of the iPhones and the Galaxy S5’s Super AMOLED is tough unless you have the phones next to each other. The iPhones have excellent displays with great color and a lot of brightness, but because they’re not OLED they simply won’t pop in most lighting situations with the same vivid contrast Samsung’s display has. The iPhones have great displays. It’s simply that Samsung’s S5 screen is, for most use cases, a bit better.

Finally, it bears repeating that we consider screen quality less important than numerous other factors, like handset design, size, brand, carrier, software, and ecosystem. It’s still important enough to test though, especially in pricey flagship phones we use to consume entertainment of all kinds.